A week after Charleston, ride sharing buddy and I packed up for 4 days in the Smokies with Donna Eaton and Adam Jones, both well-known photographers who have published lots of Smokies images.  As always, I forgot to take the right clothes and spent some periods of time uncomfortably cold.  We spent the first morning in Cades Cove and were lucky enough to be greeted by both fog and great light.  It looked just like this when I pressed the shutter: 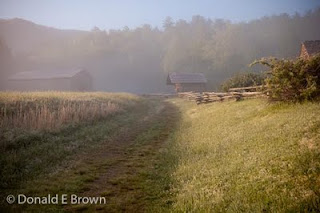 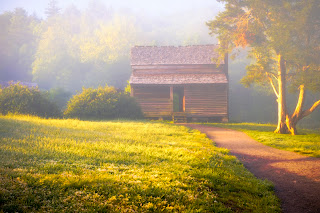 My favorite subject in the Smokies is the water cascades and creeks.  I managed to capture a couple that I really liked to add to my collection: 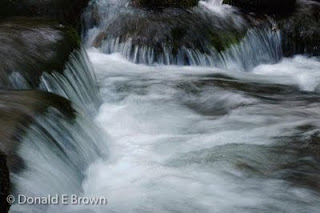 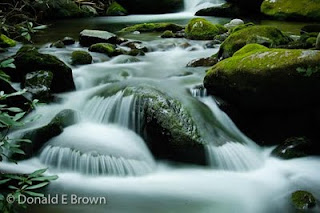 On the way home from Charleston, we spent a couple of hours at the Beidler Forest Audubon Center.  The park is owned by the South Carolina Audubon Society and is a treat, especially in the Spring when the Prothonatory Warblers gather in numbers to nest and raise their next generation.  I knew from a friend that there was a nest near the boardwalk near the lake but could not find it.  Then suddenly we saw this fellow pretending to have a broken wing and leading us away from the spot where we were standing; 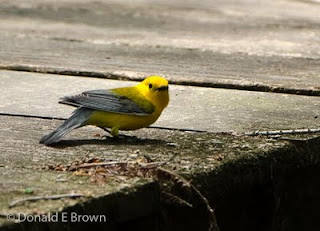 Of course, he accomplished just the opposite of what he intended because he only confirmed to us that we were in the right place.  So we settled down to wait and soon he came back, this time with food for the mom.  He stage himself on a Cyprus knee for a few minutes and then, seeing that we weren't going anywhere he flew to the Cyprus Knee that was the home of his wife and kids. 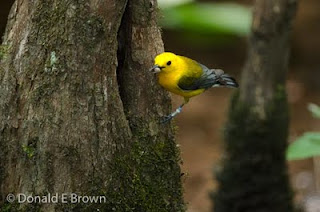 A great way to end a road trip!!This year promises to be wonderful for me!  Full of great new images!  You are welcome to come along with me and I promise I will post more regularly from now on!
Posted by DonaldeBrown Photography at 11:05 PM No comments:

In April I entertained my 17 year old grandson for a week of college visitations.  I feel definitely blessed that my daughter has managed to raise such a grand grandson.  We had a ball together.  I hope he enjoyed me as much as I enjoyed him.  After I put him on an airplane to return home, I packed and, together with a friend, we drove to St Augustine to photograph the birds at the natural rookery on the grounds of the Alligator Farm.  Literally thousands of Wading Birds make their way to St Augustine Alligator Farm to give birth and raise the next generation.  Egrets of all types, Herons, Wood Storks, Ibis...and, this year, at least a dozen nesting pairs of Roseate Spoonbills.  All of this within 50 yards of the boardwalk that winds itself through the area and over the water which harbors the alligators.  The birds depend on the alligators to keep predators away from their nest and, occasionally and unwittingly, reward the alligators with a fallen chick or egg. 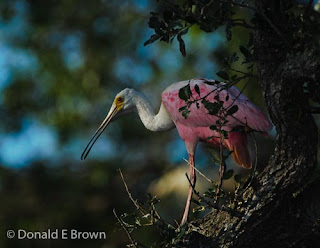 From the Alligator Farm, we drove up to Charleston for the weekend of April 29th where the CNPA Photography Weekend was taking place. Nearly 100 photographers participated in daily photo shoots in and around Charleston, SC.  While on Kiawah Island searching for Painted Buntings to add to my life list, I discovered an Anole Lizard who was inflating his sac on a nicely textured tree stump and stopped for a couple of shots....What a surprise when the shot won 1st place in the contest held as part of the activity.  Here is the prize winner: 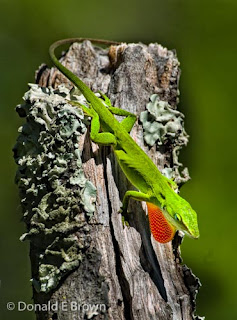 I also managed to finally spot and photograph the Painted Bunting while on the Island: 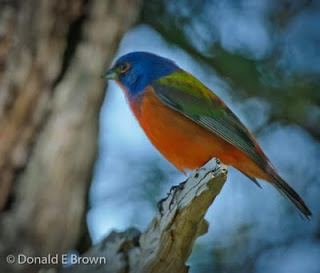 What an elegant creature.  What an imagination his creator must have!
Posted by DonaldeBrown Photography at 10:50 PM No comments:

On the Road Again

Finally, a few days to relax and rest for the next journey!
Since I posted last I have been on a whirlwind of a tour taking advantage of the good weather and great opportunities before the July/August heat forces me inside to catch up on my editing.  when I last checked in the birds at the Heron Rookery off of 4-Mile Creek greenway were rebuilding relationships and nests.  Unfortunately, of the original 15 nests a wind storm destroyed 6 of them and the rookery is now down to only 9 nests.  For the first time 2 of them built nests in live trees on the periphery of the wetlands area.  A nest with greenery around it definitely provides a new view of the families.  I continue to visit most every day when I am in town and continue to marvel at their antics and devotion to raising their young.  they could definitely be role models for some of us humans.

I left Charlotte on March 5 headed for Houston and then on to South Texas (McAllen).  If you like birds, you must visit South Texas.  The area around McAllen happens to be where 2 major flyways converge and, as such, is one of the most diversified places in the world in the Spring and Fall, during the migrations.  The International League of Conservation Photographers has worked hard selling the ranchers on the concepts of conservation and managing their lands in a way that accommodates birders and photographers.  A good number of them have set aside land that they allow to be natural, building ponds and blinds to accommodate photographers.  The experience is one that I will not soon forget and I definitely plan to return soon.  I spent Sunday, the 13th, on the Martin Ranch.  After settling in the first of 3 blinds I frequented that day, this Harris Hawk arrived to welcome me! 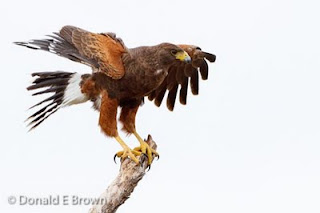 He was wary, as though he knew we were there (in the blind) but could not quite figure out exactly where we were. After a while he ventured down to the carcasses that had been left there to entice them for this photo shoot.  I shot mainly with a Canon 500mm f4 lens and there were times when the birds were too close to focus.  After a few minutes the first of half a dozen Caracaras showed up!  From that point on the action was non-stop and I am glad I was not shooting film.  I would have surely exhausted any supply I might have had.  These birds were magnificent. 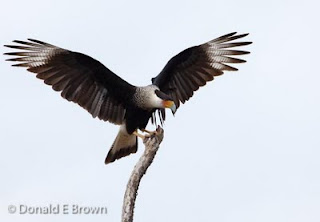 While there I spent time also at Santa Ana NWR which happens to be one of the country's top birding locations.  I was able to capture for my first time birds that I had never been able to spot before.  Some of them do not range much further north than about Corpus Christi.  Here is a Great Kiskadee 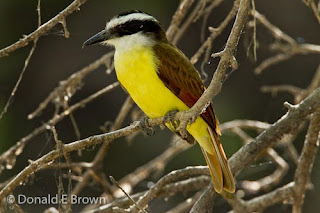 And a Black-Necked Stilt 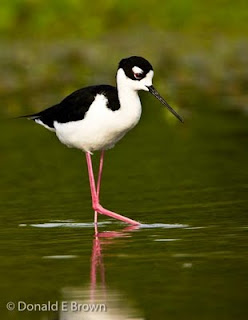 I was in heaven for this week!!
Posted by DonaldeBrown Photography at 10:33 PM No comments: