What a wonderful Autumn

As we experience the weather gradually turning a bit cold, I cannot help but reflect back over the last few weeks and months.  It has been a magical Autumn for me this year.  I started the Fall season off with a visit to Cades Cove chasing bears.  The bears disappointed us since they were not as plentiful as we  thought they might be because the cherry trees failed to bloom.  As a result, the bears we did see were obviously a bit underfed and not gaining the weight they need to store up for the winter.  I surely hope it gets better for them. 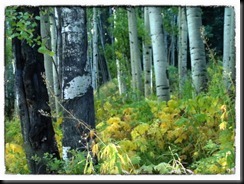 My travels then took me to Colorado Springs, Colorado.  I lived there in the Seventies and Early 80s, teaching Computer Science at the Air Force Academy.  I spent lots of time in and around Colorado Springs but the highlights of my visit was to the Great Sand Dunes National Park and then to Crested Butte and Trebler and Ohio Passes.  The Aspen Groves in this area was spectacular.  The Shot above was taken alongside the road on Ohio Creek Pass. 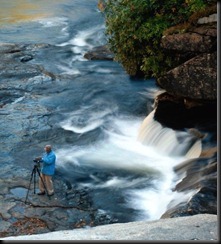 And then the last couple of weeks have been spent exploring the Blue Ridge and the Appalachian Mountains for Autumn color and waterfalls and we were not disappointed.  The shot above is at the foot of the Middle Falls in Dupont Forest (NC).  Notice the reflections of the trees up on the bank in the water and rocks down below.  Soon after this shot was taken by my friend Edgar Payne, I slipped and injuried my knee on this hard and slippery slate. It would be an understatement to say that It was worth it but it was!!

Posted by DonaldeBrown Photography at 9:30 PM No comments:

This is a test of using Windows Live writer to post to my blog. 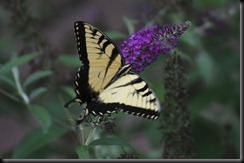 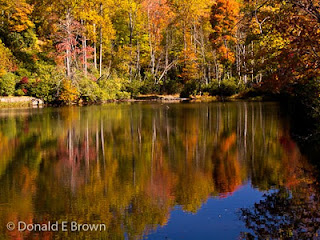 Woke up this morning feeling bored with nothing to look forward to and decided I needed to kick-start my engines so contacted a friend for an all-day visit to the Appalachian Mountains and the Blue Ridge Parkway.  As soon as I reached Hickory I knew that this was not exactly a good idea.  The traffic was like rush hour in New York.  It seems everyone and his brother woke up and decided to visit the mountains and view the leaves.  Aside from the crowds, though, it was absolutely breathtaking.  The leaves from Milepost 295 to Milepost 316 which includes Linville Viaduct, Grandfather Mountain and Linville Falls, are definitely at their peak and won't last another week.  But they are really awe inspiring now and for the next few days.  I was really mesmerized by the Rocky Mountains and the Aspens in "bloom" and they were really nice but the Blue Ridge is just as nice in its own way and much closer to home!  The image posted with this blog is at the little lake pulloff right before reaching Julian Price Picnic area.  The lake was still, the leaves were sparkling and the reflections were awe inspiring!!
Posted by DonaldeBrown Photography at 7:58 PM No comments: 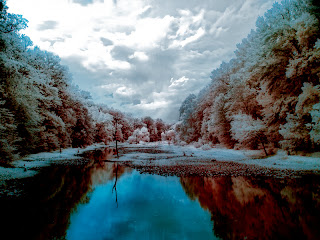 I am really amazed at the images that can be made from the usually invisible light rays of the Ultra-violet or Infrared light spectrum.  I spent the afternoon over at Pee Dee NWR a few weeks ago and this is one of the Infrared images that resulted.  I like the feeling of depth realized because of the converging trees and the reflections in the lake.  The image is a bit overprocessed but it has potential, I think, and is truly a view not often seen of Pee Dee NWR.
Posted by DonaldeBrown Photography at 8:55 PM No comments: