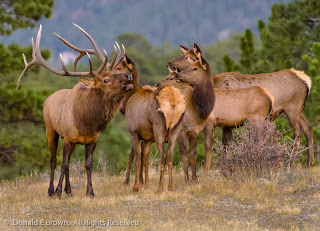 I am finally making a bit of headway on the images I captured and brought home with me from the Western US parks I visited last September and October.  The problem is that every time I come across one that impacts me, I can't resist processing it to align with the way I remembered the scene and the next thing I know it is 3am again and time to get some sleep!!  The Elk which can be found in most of the parks continue to pique my interest.  First of all, they are massive animals and the males are huge with massive antlers....huge!!!  The males hang out together most of the year and completely ignore the females but for the fall breeding season when their attention fixates on the females and they work night and day on building their harem of females and keeping them intact until bred properly.  That is a tough job because they don't settle on a few females but seem to be driven to claim every female in the territory.  And, of course, this causes interesting conflicts resulting in exciting battles between the males.  It is such a spectacle that folks come from thousands of miles, bring their lawn chairs into the parks and line the meadows where the Elk usually bed down for the night and the shenanigans serve as entertainment to thousands and a big photo op for photographers who emerge from every corner of the earth. This big buck had gathered a harem of about 14 females and these 4 had wandered away attracting another male who tried to herd them towards his harem.  This bull successfully chased him away and is now (I imagine) chastising the females as he prepares to drive them home!!

Posted by DonaldeBrown Photography at 10:58 AM No comments: