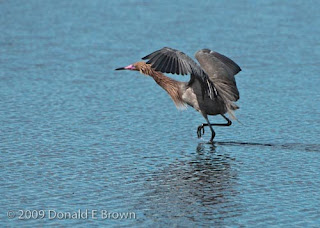 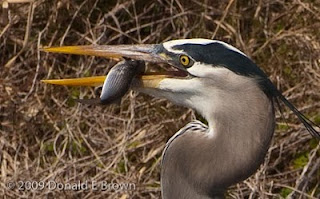 Started Day 3 by over sleeping!! When I opened my eyes and looked at my watch it was already 8am. I had intended to be in Merritt Island NWR by 8am this morning. I guess all of that exercise and fresh air yesterday was a bit too much for this old man. Got packed and on the road and arrived at Merritt Island about 10:30am. It was a nice slightly overcast day which worked in my favor and the Refuge was packed with birds. I have never seen so many ducks on Merritt Island: Shovelers, Blue Winged Teals, Pin heads...huge flocks of them. I suppose they will be leaving soon since it is finally getting warm down here. Anyway, I shot until about 3:30p and decided to hurry over to Viera Wetlands for last light. Shooting was okay but not as good as Merritt Island was...did see a couple of Sandhill Cranes though and that was kind of a surprise. Will meet Don Wuori and his wife, Joanne, there tomorrow morning so better get some sleep and set my alarm this time.
Posted by DonaldeBrown Photography at 9:15 PM